Our middle child, Stefanie was born 19 years ago today. We were living in western PA @ the time and were having a heat wave with record temps in the 90's. I sometimes think that's why Stefanie loves the summer/beach so much. Stefanie came along almost exactly three years after her big sister. She and Jenny actually had the same due date, but Jenny was born two weeks early. Like Jenny, I was sick as a dog for the first three to four months, and could barely keep anything down.

At one point they threatened to put me in the hospital because the nausea was so bad. Then I got the flu and was vomiting so hard that all of the blood vessels in the whites of my eyes burst- I looked like a walking Halloween mask- not attractive. I had decided that I wanted to try and do a V-back, meaning I wanted to try and have Stefanie via a "regular" vaginal delivery since I had to have a C section with Jenny. They told me they would not allow me to go past my due date because she was so big. They were afraid I might rupture my uterus. After twelve hours on Pitocin, they stopped it around midnight and told me they were just going to do a C-section the next morning (not that I got any sleep because even though they stopped the Pit drip I continued to have contractions all night.)I found out later that Jeff had a talk with the doctor just before midnight and asked him if she would be born anytime soon because he didn't want me going through what I did with Jenny- the doctor said he didn't think so- so they stopped it. Stefanie was born just after 8:00 A.M. all 9 lbs. 15 oz. of chubby baby. (Yes I said 9lbs. 15oz!)She had to go into an incubator for the first 24-48 hrs. because she was having a little trouble breathing. 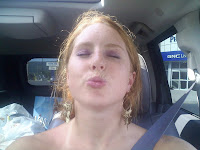 They sent Jeff along with her to the nursery and I was taken back to my room. I kept asking for her and no one would bring her to me. By mid-late afternoon I got worried. I STILL hadn't seen my baby. I kept asking the nurses over and over to please bring me my baby. I guess they all thought someone else did because she never came. Finally I decided enough was enough, and when the last nurse came in to tell me she was fine, but in an incubator I started to try and sit up, then STAND up and began getting out of bed while holding on to my IV thing which was on wheels. I was going to FIND MY BABY! The nurses all started getting very excited and kept asking me to get back in bed etc. but I made it out into the hallway before one nurse stopped me and asked me to please get back in bed, the she would personally go right then and get Stefanie for me.

I remember taking her hand and telling her I NEEDED to see her, she needed to nurse. The nurse promised me she would go get her and she did. They wheeled the incubator into my room about 5-10 minutes later... and there she was :)

Stefanie was a good baby. She slept and ate well and had a very happy disposition. We called her our sumo wrestler baby because she had these rolls of fat on her little thighs, but she quickly slimmed down and was just adorable. I knew early on that Stefanie was going to be a handful- after her brother was born and she was just about three my mom came to visit and brought gifts for the kids. It was JJ's christening so she made up gift bags for the girls so  they would have something too. Jen just dumped her whole bag onto the bed and sorted through stuff. Not Stefanie... she took each item out, one at a time and then sorted them all into a line and placed everything according to size... from the smallest to the biggest. My mom looked at me and said "oh you are in for so much trouble..."

Stefanie was my over achiever in high school, she was very driven and had excellent grades. She also cheered in high school and was on the all star team her sister cheered on outside of school. By the time of her junior year she was in the National Honor Society and senior year chaired a fundraiser held the day before Homecoming (Powder Puff football) which raised about $10,000 for Alex's Lemonade stand. She was named to the Homecoming court that year and believe it or not broke her nose the day before Homecoming- thank God for ice and make up!!!

Stefanie just finished her freshman year @ James Madison University and her "Big Daddy" & I are so very proud of her. She switched her major from Business Marketing to Geology and absolutely LOVES it! She cheered @ JMU and just made the squad for next year as well. It keeps her very busy, but she loves cheering!     She just got home for her summer break and will begin working soon.
Our Stefanie A.K.A. "Tweety" is a loving, caring, spiritual, intelligent & beautiful young woman.She out of all of us is the one with the soft spot for people. She LOVES old people and is the one who will probably be "stuck" with Jeff & I when we grow old ;) She helps @ home without being asked and pushes herself harder than Jeff or I could ever push her. I miss her terribly when she is away at school, but know that she is spreading her wings. She has decided that she wants to work to help save our environment and to help develop "go green" technologies. Whatever she ends up doing I KNOW she will be successful.
Happy Birthday Stefanie! Daddy & I love you VERY much!!
Love,
Mom <3 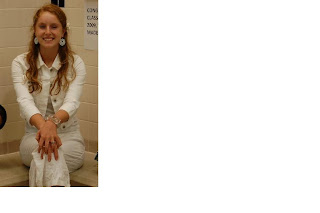