Some of the blogs I read have had blogs about their pets recently... so I decided to do the same...I have two yellow labs... 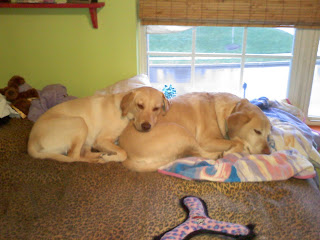 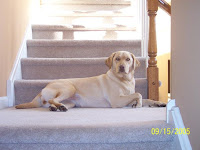 Buffy is not your typical lab... since we got her when she was 7 weeks old she has always been very calm and laid back. My vet actually told me he has NEVER seen a lab as calm as she was/is in all his years as a vet.  Buffy is just an old soul... she is the very loving and is a pleaser. She became the princess in our house to my "queen". It was our 20th anniversary and hubby said he would get me (within reason) anything I wanted- *he thought I was going to ask for jewelry*... I had been hinting @ diamond stud earrings. But I surprised him and said "I want a puppy" to which he responded "man I walked right into that one". :) Ever since then...she has become the traitor "daddy's girl"- she can do no wrong in her father's eyes.

Well... our 25th anniversary was coming up last summer and instead of waiting for hubby to ask what I wanted (he by this time had learned not to offer an open ended kind of gift) I decided to take the bull by the horns and tell him it was time... I wanted another dog...hence...

Cali a.k.a the "wild child"

Cali is more your typical lab... she isn't as bad as Marley from the movie, but she has her moments... Cali is definitely the alpha at our house, but her disposition is so sweet that you don't really think of her as an alpha.  She is a snuggler.. and doesn't understand that she is really too big to lay on you anymore. 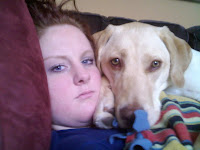 I know hubby gets frustrated with her, she is demanding... she still has occasional "accidents" but all in all I feel much safer with her around, especially since we are living apart right now ... She barks when she hears something (which Buffy NEVER would do) and she growls when she is in the car with me and someone gets too close to our car. And most importantly Cali ADORES me *which is vitally important* and unlike the traitor Buffy - I am HER favorite... She is still learning and we will both benefit from obedience training later this spring.

Both of my "girls" have the same coloring- which is somewhat unusual for yellow labs- their eyes are greenish hazel and they have light brown noses unlike the usual dark brown eye/nose of most yellow labs. To me they are perfect... they have added such joy to my life I can't imagine not having them...It was a transition because Buffy was very jealous of Cali @ first but now they play and wrestle and Buffy has been spotted actually kissing Cali *when she thinks no one is looking* I know they both are anxiously awaiting summer (as am I) because they both love swimming in our pool. 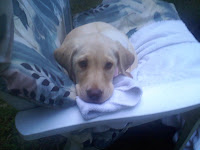 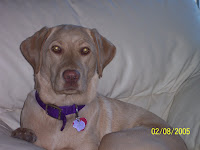 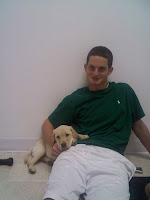 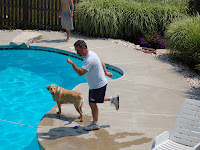 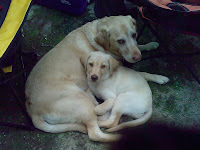 Now if I could only get my kids to listen as well as they do....