No I am not dead, just incredibly busy!

This summer the excuse was working on our cabin, which looks fabulous by the way (pics to come later)

Then school began and holey guacamole!

Instead of having grades 9 through 12 I now have grades 8 through 12!
27 new students added to my caseload! Talk about stressing & pulling your hair out.

I finally feel like I have a handle on things, but let me tell you. My days FLY by! I blink and it's lunchtime, I blink again and it's time to go home. Two days a week I go work out and them stagger home to "regular" chores etc.

I have tried to keep up with as many of my regular blogs as I can, but...

Anyways, I am going to try (key word) try to post at least once a week... if anyone is still listening

We shall see, have a great weekend all!
Posted by life in the mom lane at 9:15 AM 2 comments: 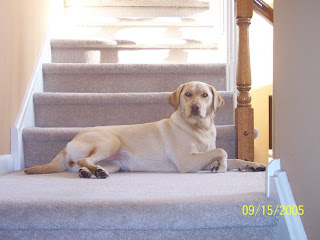 Sadly we have just found out that our beautiful Buffy has a tumor in her abdomen, it is at a very bad place and is putting pressure on both major arteries and nerves. She has Cushing's disease, which  the vet believes is unrelated, but that complication added to her age (9) leaves an extremely poor prognosis.

He said she probably only has weeks left.

We are needless to say overwhelmed and heartbroken.

Luckily our vet is willing to do whatever it takes to keep Buffy comfortable. When I asked him what we should watch out for to signify that she was worsening he replied with one word... Collapse.

People who are dog lovers will understand the agony I am feeling. We are going to lose a family member. One who has been faithful, and who has brought great joy to our lives.

We are trying to make whatever time is left wonderful for her. She is having pancakes/syrup daily, getting lots of extra attention, going on car rides, all of the things she loves.

You can learn a lot from a dog; patience, loyalty, an enjoyment of the little things in life. The following pretty much sums it up:

Everything I Need to Know
I Learned From My Dog

Author Unknown.
Taken from the Web.

When loved ones come home, always run to greet them.
Never pass up the opportunity to go for a joyride.
Allow the experience of fresh air and the wind in your face to be pure ecstasy.
When it's in your interest, practice obedience.
Let others know when they've invaded your territory.
Take naps and stretch before rising.
Run, romp, and play daily.
Thrive on attention and let people touch you.
Avoid biting, when a simple growl will do.
On warm days, stop to lie on your back on the grass.
On hot days, drink lots of water and lay under a shady tree.
When you're happy, dance around and wag your entire body.
No matter how often you're scolded, don't buy into the guilt thing and pout ... run right back and make friends.
Delight in the simple joy of a long walk.
Eat with gusto and enthusiasm. Stop when you have had enough.
Be loyal.
Never pretend to be something you're not.
If what you want lies buried, dig until you find it.
When someone is having a bad day, be silent, sit close by and nuzzle them gently.

I am participating in a monthly photo challenge over @ PJ's place and this month's prompt was transportation.

It's been a year now since I got my "sweetie"- she's a Chrysler 200 and I absolutely LOVE her!
She gets me where I want to go in style and is very comfy too!

Tonite JMU beat LIU in the first game of the NCAA tournament!
My daughter cheer girlie was there cheering on the Dukes!
And tonite she got on TV!!!!! 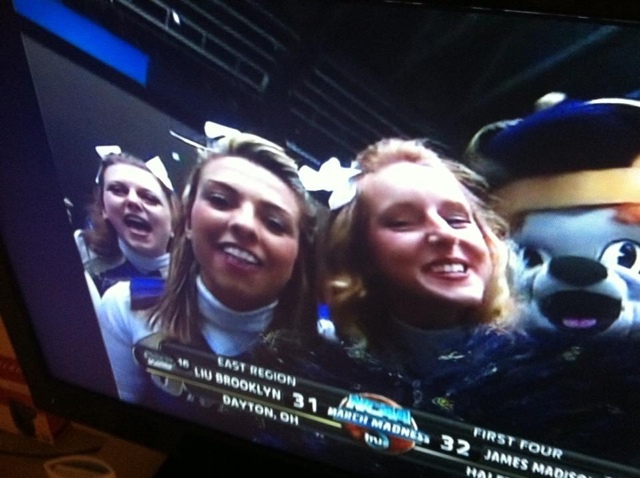 Labels: Cheer girlie on the right 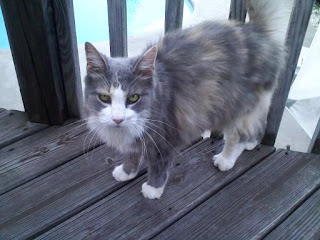 Ashley passed this morning at the ripe old age of 20.
She will be deeply missed.
Best. Cat. Ever.
Posted by life in the mom lane at 8:19 AM 6 comments:

I have  to apologize because work/life has been incredibly busy the past week so I have not been able to comment on many of your posts... I am hoping to be able to take some time this weekend and "catch up!"

~~~~~~~~~~~~~~~~~~~~~~~~~~~~~~~~~
Gert told Enis to head on into the diner and that she would follow shortly. She picked up the phone and punched in the numbers. She heard Rich answer with his usual curt hello.
“Rich it’s Mama” said Gert.
“Hello ma, what’s up?” said Rich.
“I don’t know how to say this so I’ll just spit it out. Son, Livie’s here.” Gert said listening for his reaction.
“Livie? Who’s Livie?” said Rich perplexed.
Gert sighed inwardly, relieved that he hadn’t lied to her all these years. Her fear had been that she’d been denied being a grandmother. “Well son Livie says she’s your daughter.”

“Ma, is this a joke?” said Rich.
“Son, this is not something I would joke about.” Said Gert.
“Ma, tell me everything this woman has said to you, I need specifics. In my line of work I have to be very careful.” Rich said with a steely edge to his voice.
Gert relayed everything she knew about Livie, she also described what she looked like and told him that she was letting her stay in Rich’s cabin.
“Is that all?” asked Rich.
Gert said yes and Rich told her that he would be home by the end of the day and to not let on who he was when he arrived.
“Let me assess her without her knowing who I am” Said Rich. “If you get the opportunity, go through her wallet and write down anything you can find in her identification and text me the information. I’ll run a check on her.”
“You’ve grown hard Richard” said Gert saddened that her son had grown to be untrusting, but understanding why.
“In my business that’s how you stay alive Ma” said Rich.
The line went dead and Gert looked at the phone frowning. Could Livie have been lying?

~~~~~~~~~~~~~~~~~~~~~~~~~~~~~~~~~~~~~~~~~~~~~~~~~~~~~
Joe woke up the next morning and turned on the morning news. He made a cup of coffee in the little coffee maker in the room and headed in for a shower.
After showering & dressing he headed across the street to the diner and once again sat at the counter. He ordered the special and watched the news on the TV behind the counter as he ate.
Just as he was finishing his cell phone rang. It was Bud, his car would be ready that afternoon, as luck would have it his part distributor had extra of the parts needed and Bud wouldn’t need to order the parts after all. Joe smiled and agreed to come by around 3:00 when Bud said it should be ready.

Things were looking up Joe thought. He finished his coffee left his money on the counter and headed back to the motel. He stopped by the office and asked if he could check out late and explained about the car. The owner gave him the thumbs up and Joe headed back to his room to do some work.
Just before 3:00 Joe headed the quarter mile down the road to the service station, paid for and picked up his car. He headed back to the motel and checked out and hit the road again. He figured it would take him about 4 hours to get to Wolf Creek and hopefully not much longer to find Livie.

Later after the breakfast rush she sent Livie on an errand to pick up the mail at the post office across the street and she went in the back to talk to Enis. She explained what was going on and told him to not let on that he knew him when Rich came in around supper time.
“Do ya think she could be lying Gert?” asked Enis.
“I hope not,  I hope I’m not that bad a judge of character” said Gert. “Imagine, a granddaughter Enis!” exclaimed Gert. “Wouldn’t that be wonderful?”
Enis smiled and gave Gert a hug. He hoped to God that this young woman was who she said she was.

~~~~~~~~~~~~~~~~~~~~~~~~~~~~~~~~~~~~~~~~~~~~~~~
Richard Anderson,  checked the data base for any information on Livie. As a high ranking officer in the Special Activities division of the CIA it didn’t take him long to run the security check. He had years of experience leading units of highly trained men who performed unconventional, and often high-risk missions. It had been a solitary life which at times he regretted, but once in, he had moved swiftly through the ranks. People depended on him because he was good at what he did.

As he read through all of the information he found about Livie, it took him back to his younger days with the CIA. He had been careful not to have any long term involvement with women. Knowing that any one of his missions could result in death made him sensitive to the risk he would put a family in. So through the years he had stayed mainly unattached.

Except for Jackie; Livy’s mother.

He closed his eyes briefly remembering her face. He was sad to hear that she was now dead. At the same time he was angry at Jackie. She had never told him. The timing was right. Now it made sense why she had put him off fifteen years ago when he had tried to contact her.
He shoved all of the information he had about Livie, including a picture from her driver’s license and headed for his car. He had to catch a plane to Montana and get to Wolf Creek.
~~~~~~~~~~~~~~~~~~~~~~~~~~~~~~~~~~~~~~~~~~~~~~~

Is that all?
No I don’t think so… this story will continue. But there is no way I can neatly wrap it all up and finish it in one last post.
So my friends, you’ll have to check back from time to time to see what happens. ;)
What is that saying?
Leave them wanting more? ;)

This is just one of many stories written by a group of  talented writers for 30 days minus 2 - check them out over
at www.weworkforcheese.com