I'd like to thank the little people who made this possible... 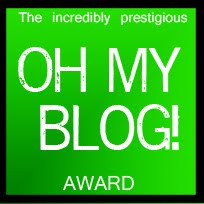 Drumroll please......
I have recently been awarded my first Blog award (how cool is that?) from Diane over at Just Humor Me.
According to the rules of the award, if you receive the award you have the choice of doing one of the following:
(a) Get really drunk and blog for 15 minutes straight, stream-of-consciousness style.
b) Write about your most embarrassing moment.

(c) Make your next post a "vlog", or video blog
Then when you are done you are supposed to pass the award on to at least three amazing bloggers, like yourself.

So I have been trying to decide which I would do...(decisions, decisions)
This was hard because first of all I have no idea how to do a vlog. So that left either blog while drunk or share my most embarrassing moment...which is hard to choose because I have had MANY embarrassing moments in my lifetime. One of which was when I began taking yoga classes 3 years ago at an awesome (and unfortunately now defunct) yoga studio. The first month they were slow getting people to take classes but for me it was really great because the owner/instructor Jason would do class and it would be just me. Since I had never done yoga before  it was like have my own personal yoga instructor.

So one day about a month into classes we are having class (just me & him) and we are doing this position called happy baby. Now when you are in this position you are lying on your back with the soles of your feet facing the ceiling and your knees bent kinda like a frog... you can hold your ankles and you are trying to "open" up your hips. So anyways.. we are almost through with class and are doing happy baby and Jason notices my form is off and comes over to adjust how I am holding the position. In doing so something within me relaxed and as he turned around to go back to his mat I let loose with a really loud fart... you know one of those ones that creeps up on you and  you simply cannot hold back that sounds like a motorcycle discharging?

Considering the fact that it was just me & him in the room there was no way to pass it off on someone else...(not that I would EVER do that *cough cough*- I have 2 dogs for a reason!)


So the fart is "hanging there" so to speak (both literally & figuratively) and I am thinking OMFG!!!! and I freeze (I don't know, in hopes that my sphincter muscles would somehow atrophy?) but in doing so somehow I inadvertently triggered something and I then felt the pressure of another building. (I couldn't make this shit up if I tried) So I am lying there legs up in the air, trying to hold the next one in and Jason being the gentleman he was, just continues on with class like nothing ever happened. The pressure of trying to keep myself "composed" begins to wear and I feel like I am beginning to sweat a bit... luckily it was the end of class and Jason put some music on during our final meditation time... he is telling me to try and find my focus, and control my breathing... meanwhile the mantra I am saying in my head is  "you will not fart again, you will not fart again..."

So we are in  the ultimate relaxation pose-dead mans pose- and I am trying to relax, but am afraid to REALLY relax for fear that I will let loose with another fart. The music is now fading... and we are to the part at the end where all we are doing is deep breathing... the room is silent.

I of course was mortified... and I think I said something like "you have got to be kidding me- I'm sorry". Jason, being the cool dude he was told me it was perfectly fine, that it was a natural occurrence during yoga. I think he was just being nice...
That was just one of my most embarrassing moments...
SO.. I hereby bequeath the incredibly prestigious OH MY BLOG award to:
Nicolasa over at Keepin' it in Perspective , Midlife Mama at  Midlife Musings , and Michaela over @ Gimme that tea towel I'll dry .

Skippy over at I Make Soap- I know you have not been feeling well, but when you are up to it I nominate you as well! :)